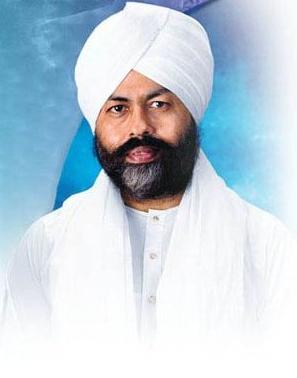 Baba Avtar Singh ji was succeded by his son Baba Gurbachan Singh ji who further spread the mission. He was shot dead in April 1980 by some miscreants.

Baba Hardev Singh Ji then took commad of Sant Nirankari Mission. He was the son of Baba Gurbachan Singh ji and became the leader of the sect after Baba Gurbachan Singh Ji was killed in April 1980. Baba Hardev Singh died in a freak road accident in Qubec, Canada on 13th of May 2016. (which again testifies that he was an incomplete saint, as saints do not meet such a death).

The sect was then handed over to Baba Hardev Singh Ji's wife Savinder Kaur, who became the first female chief of this sect. In July 2018, Savinder Kaur passed on the seat to her daughter Sudiksha Singh.

This is the naam (naam daan) given by Sant Nirankari Mission Universal brotherhood Gurus which is totally self made and arbitrary. There is no mention of this naam in any of the Holy Scriptures available to mankind.

Form of God in Nirankari Mission

All the Holy Scriptures prove that the Supreme God is in Human form. Sri Guru Granth Sahib, Bible, Vedas etc very clearly mention the Human form of Supreme God. This proves that these Nirankari Gurus had no knowledge about The Supreme Lord and are incomplete and thus cannot provide salvation to their disciples.

"God has neither prescribed nor forbidden any particular food
Whatever we eat or drink relates to the body, it has no relation to the soul.
O'man sit and ponder sometime with a cool serene mind
How does it matter to you if someone wears a dhoti, long underwear or a shallower
You may eat, drink and wear whatever you like....""

The above lines speak for the spiritual level of Avtar Singh and other Nirankari Gurus. A saint who professes eating meat by saying it has no relation to the soul and also says that God has not forbidden any food is a total ignorant and has or had no knowledge about the Holy Scriptures.

Kabir Sahib is saying that those who consume meat consider﻿ them clearly to be demons. Do not remain in their company, your bhakti will suffer.

Meat may be from a cow, a deer or a chicken, those who consume meat are destined to hell.

Those﻿ who take initiation from Gurus, who consume meat and alcohol, never achieve salvation, instead are destined to deep hell.

Those who kill living beings for eating are heinously sinful people. They can never go to heaven. they go to hell.

If one's clothes are stained with blood, the garment becomes polluted.
Those who suck the blood of human beings-how can their consciousness be pure?

Forcefully and without any compassion you kill a goat etc. and say that you are doing halal. When your account will be called for in the court of God, then who will save you there?

Superior most food is khichri (dish made from rice and lentils with salt), eat that. One who cuts someone else's neck has to pay back.

You keep fasts to please Allah (God), while you murder other beings for taste. You only look after your own interests and don't care about others. You are wasting your time, God will never be pleased with you.

This proves that the Nirankari Gurus did not have any scriptural or spiritual knowledge. Moreover their wrong naams and wrong teachings cannot lead their disciples on the path to salvation. The teachings of Nirankari Mission are opposite to the injuctions of our Holy Scriptures which renders the Nirankari Mission completely useless, self made and arbitrary.