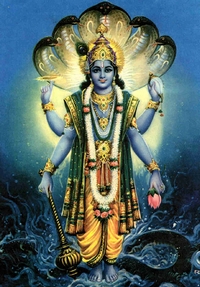 Lord Vishnu resides in the "Umbilical Lotus / Naabhi Kamal (नाभि कमल)" in the body and this lotus has 8 petals.

The above account proves that Lord Vishnu is not supreme.

There are many other similar accounts which also prove that Vishnu is not the Supreme God.