Situated in Puri, Odisha, India, there is a temple dedicated to Lord Jagannath, an incarnation of Lord Vishnu. It is a very famous religious site for followers of Hinduism and scores of devotees make a pilgrimage to Jagannath every year. Jagannath is also famous for a "Rath Yatra" (a chariot ride).

There are 2 very interesting observations about the Jagannath Temple

To get answers to the above two questions, one has to know how the temple of Jagannath Puri was built.

How was the Temple of Jagannath, Puri built? Final attempt by King Indradyumna at building the Jagannath Temple

King Indradyumna for one last time started the construction of Jagannath Temple under the aegis of Saint Kabir. Saint Kabir asked King Indradyumna to also construct a platform in front of the sea from where the sea used to rise and said that I will sit here and contemplate the name of God and stop the sea from destroying the temple. This platform is the place which is today known as the Kabir Chaura in Puri.

Confrontation between Sea and Saint Kabir 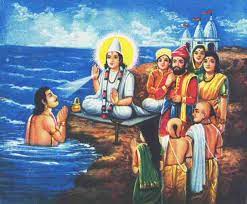 Once the Temple of Jagannath Puri was almost complete, the sea arose again for one final time and moved towards the temple. Saint Kabir sitting on his platform raised his hand as if giving a blessing, and as a result the sea could not advance any further. Realising his inability to advance, the sea appeared as a Brahmin in front on Saint Kabir and expressed his desire to advance further and sought the permission of Saint Kabir to allow him to proceed to demolish the temple. Saint Kabir denied the request of sea and asked him to retreat. The sea then narrated his reasoning for destroying the temple. Sea said that in Treta Yuga, Lord Rama (incarnation of Vishnu) had threatened him with destroying the ocean at the time of building a sea bridge to Lanka. So in order to take revenge, he (sea) was not allowing a temple of Lord Vishnu to be built here. Saint Kabir said to sea that I will not allow you to destroy the temple anymore. Sea then asked Saint Kabir to allow him to take his revenge in some possible way. On this Saint Kabir said that he may drown dwarika (the place of Lord Krishna during Dwapar Yuga). As a result the sea retreated from Jagannath Puri but drowned Dwarika instead.

This clarifies the connection and importance of Saint Kabir and Kabir Chaura, Puri in the construction of Jagannath Puri Temple. Why do the wooden idols of Lord Jagannath, brother Balabhadra and sister Subhadra have amputated limbs?