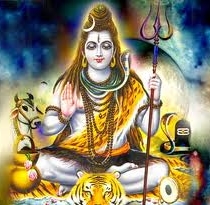 God Shiva (शिव) son of Durga and Brahm (Kaal) is one of the Trigunas. He is "tamguna" whereas Brahma is "Rajguna" and Vishnu is "Satguna" He is considered the destroyer. He is the youngest amongst Brahma, Vishnu and Shiva. He lives with his wife Parvati at Mount Kailash. His "lok" is called "Shivlok or Sivalok". God Shiva resides in the "Heart Lotus (हृदय कमल)" in the body and this lotus has 12 petals.

In Shrimad Bhagavad Gita Adhyay (Chapter) 7, shlok (verse) 15 the worship of all the three gunas (Rajguna, Tamguna and Satguna) is prohibited because one cannot attain salvation by worship of three gunas. Prime examples of worshipper of God Shiva include "Ravana" and "Bhasmasura" who were actually classified as demons.

God Shiva himself does the worship of some other God and is seen mostly meditating.

Lord Shiva is not Supreme

There are many inferences in our Holy Scriptures that prove that Lord Shiva is not Supreme God. One of the main ones is the one below.

There was a devotee named Bhasmagiri, who considering Shiva as his deity, did worship for 12 years in Sheershaasan (headstand), bound Lord Shiva with a promise and obtained bhasmkanda (a bracelet which when kept over someone’s head turns that person into ashes on saying ‘Bhasm’). His aim was that after obtaining bhasmkanda, I will kill Lord Shiva and make Parvati (Lord Shiva's wife) my wife. After gaining bhasmkanda he tried to kill Lord Shiva only. Lord Shiva ran in fear and bhasmasur started chasing him. Then Lord Vishnu acquires the form of Parvati and appears in front of Bhasmasur. In Parvati form Lord Vishnu made that Bhasmasur do a dance. In doing so Lord Vishnu made Bhasmasur take his hand containing bhasmkanda over his head and on saying "bhasm" it turned Bhasmasur into ashes. From that day on Bhasmagiri came to be known as Bhasmaasur i.e. a demon.

The above account proves that even Lord Shiva is not supreme who had to run for his life.